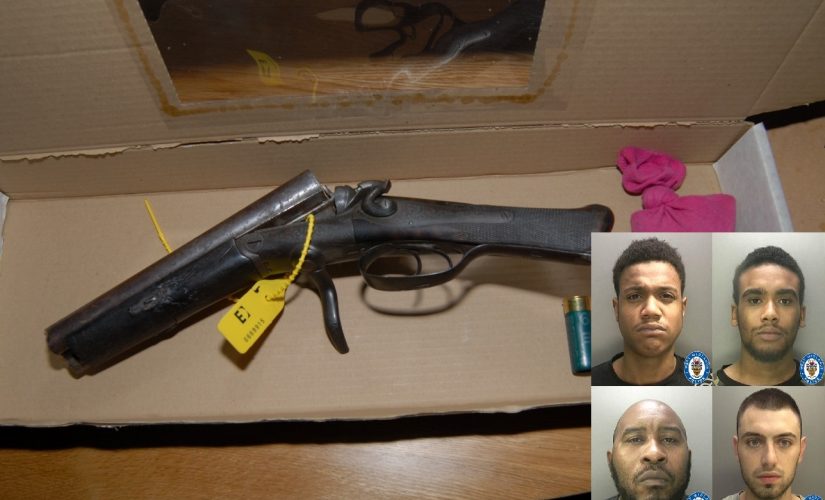 A group of men have been convicted of plotting to arm a Birmingham gang with a lethal gun after Police cracked a pin-locked phone to expose the conspiracy.

Jamael Scarlett (25), Courtney Farrell (24), Sharif Cousins (45) and 24-year-old Malachi Thompson intended to put the shotgun into the hands of a prominent gang in the south of the city.

The case dates back to 2017 when Police launched an operation to target the Frankley based “61” gang which was behind an increase in serious violence.

We struck a major blow against them on 6 June that year when we raided an address linked to the group and seized a pellet pistol converted to fire live rounds, an antique .22 single-shot handgun and a sawn-off shotgun.

Leading 61 member Scarlett sought to replenish the gang’s arsenal of weapons and turned to Cousins to source the weapons and Thompson and Farrell to help fund the purchase.

Our officers arrested Scarlett – later jailed for 16 years for firearms and drugs offences – and Cousins as part of the wider gangs offensive on 26 July 2017.

Cousins was shot by our armed police during the incident with the Independent Office for Police Conduct – the police watchdog – later clearing the officers of any wrongdoing.

His password protected phone was recovered and – though Cousins maintained he was an innocent man – we managed to access the handset and found messages showing he was plotting to supply a shotgun.

Cousins, Scarlett, Farrell – who’s serving a nine-year prison term – and Thompson all admitted conspiring to purchase a shotgun between 5 June and 12 July 2017.

And at Birmingham Crown Court yesterday (28 Oct) they were jailed for more than 10 years combined.

Scarlet, of Dordale Close, Northfield, and Farell of Grizedale Close, Rubery, were each given an extra two years behind bars.

Investigating officer, Detective Inspector Al Teague, said: “Evidence gathered during the investigation showed Scarlett quickly became determined to re-arm himself and the gang to protect and advance their criminal interests.

“Each defendant played an integral part in the conspiracy. Thompson facilitated Scarlett viewing the shotgun with ‘his people’, while Farrell agreed to pay money towards the shotgun if he could use it.

“And examination of Cousins’ phone showed message exchanges proving he was also complicit in the supply of the gun. He tries to acquire a gun from associates and agrees to travel with Scarlett to view the gun.

“And when Scarlet is arrested for an unrelated matter, Cousins communicates his concerns in messages hoping that Scarlet has wiped his phone because it contained incriminating evidence against him.”

Det Insp Teague said the south Birmingham communities were understandably concerned about gang tensions in 2017 but that the operation to target the offenders was successful.

He added: “We were talking about a small group of people but they were causing lots of fear amongst the wider public.

“We responded with an intensive operation targeting those involved in gang activity. It involved ‘lockdowns’ in key locations with police, armed officers and independent observers on the lookout for suspects and vehicles with gang links.

“It worked and, thanks to the arrests and seizures, we saw a significant fall in the number of reported firearms discharges in the areas they operated.

“And it should act as a wake-up call to anyone who believes gang life is somehow lucrative or attractive: every day these people run the risk of being sent to prison for a long time, or killed or seriously injured through their own actions.”

Another man was found not guilty of the same charge.